Lighting quality is an important issue affecting much of the American populace. How do lights affect us? How is that measured? Knowing the terms and information surrounding light quality and measurement can assist property managers and building owners in finding the best light sources for their spaces.

What is Lighting Quality? This nebulous term is defined in the 1986 Mechanical and Electrical Equipment for Buildings as “a term used to describe all of the factors in a lighting installation not directly connected with the quantity of illumination.” Lighting quality is defined as “lighting that allows you to see what you need to see quickly and easily and does not cause visual discomfort but raises the human spirit” by P.R. Boyce in Human Factors in Lighting, 2014. The International Commission on Illumination defines lighting quality as the “degree of excellence to which the totality of lighting characteristics fulfils user need and expectations or other applicable requirements.” (International Lighting Vocabulary 17-29-029).

There are important takeaways in these definitions. First, lighting should be easy on the eyes while keeping things visible. Second, it’s not necessarily how much light there is, but how that light it used. And finally, good lighting ought to “raise the human spirit.” The usability, brightness, and effects on mental health of light are all factors to consider when thinking of indoor lighting quality.

Lumens and Watts are the primary metrics used in lighting. Lumens refer to the brightness of a light source, while Watt refers to the amount of energy used. These two measures are combined to describe lights as lumens per watt, notated lm/W. So, an incandescent light may be 16 lm/W, giving off 1600 lumens and drawing roughly 100 watts. This the most quantitative way to measure lighting, but it does not necessarily describe a light quality, only its illumination quantity and energy consumption.

The first, and most efficient, light source is the Sun. Our local star generates roughly 3.846×1026 Watts (or 384.6 Septillion watts) per second. Luckily, most of this energy dissipates into space or is blocked by the ozone layer and other protections, so we get about 105 lm/W on Earth rather than the 3.573×1028 (or 35.73 Octillion) total lumens the Sun puts out. Humans have yet to create a more efficient light, but there are a few reasonable and efficient options available.

Compact Fluorescent (CFL) bulbs produce light by driving an electric current through a tube containing argon gas and a small amount of mercury vapor, generating ultraviolet light and exciting the fluorescent coating. CFLs take 30 seconds to three minutes to get going, but once they do, they use roughly 70 percent less energy than incandescent bulbs.

Light-Emitting Diodes (LEDs) are another option that have become more efficient and long lasting in recent years. LEDs produce around 80 to 90 lm/W. An ENERGY STAR® Certified LED bulb is about 88 lm/W (800 lumens/9 watts) and is estimated to cost $1.26 in energy each year. A 43W halogen incandescent bulb produces the same lumens and has an energy cost of about $6 each year.

The switch to LED lighting began in 2008 with the United States Department of Energy’s L-Prize competition, which was won by Philips in 2011 with a 940 Lumens, 10-watt LED Bulb. The L-Prize Competition began again in May of 2021, with the concept phase currently in progress.

Measuring the brightness and energy use of light sources is straightforward. Divide the lumens by watts and you have the amount of light produced per unit of energy expended, or lm/W. Measuring lighting quality is a whole other story.

There is no universal measure for lighting quality. Lighting quality itself is quite nebulous and the true effect of artificial light on humans is not fully understood. How do LEDs affect people in an office environment over five years? 10? What about over someone’s career? These are some of the unknowns surrounding lighting, but there are multiple factors that can be measured, either quantitatively or qualitatively.

The simplest measure to explain is light temperature. This is not temperature as it appears on a thermostat. Lighting temperature refers to the color of the light, measured in Kelvin (K). Light temperature works along a spectrum from lower color temperature (warm, redder light) to high (cooler, bluer lights). A candle sits around 1,900K, and the cool white of LED bulbs are around 7,000K. Different light temperatures have distinct effects, with warmer temperatures appearing more intimate and cooler hues giving a clean or sterile appearance.

Spectral power distribution (SPD) can describe the color of the light (like temperature), and the quality of the color. Color quality is defined by color rendering and discrimination. Rendering is the illuminator’s effect on the perception of an object’s color, such as a dress appearing as blue in daylight and black in dim light. Color discrimination is a light source’s ability to differentiate colors, such as the different shades of red or green in apples under an illuminant.

Lighting quality is highly subjective. A warm light for some may be painfully bright to others and receiving wide feedback on lighting changes is best in an office setting. Creating a space people want to enter and work in is important in attracting tenants and remembering to factor in lighting quality, as nebulous a concept as it is, can make a major difference when designing a space.

To stay up to date on news and resources such as this and other topics of importance to the real estate industry, subscribe to the free CRE Insight Journal Newsletter using this link.
Sources

How to Have a Successful Interview 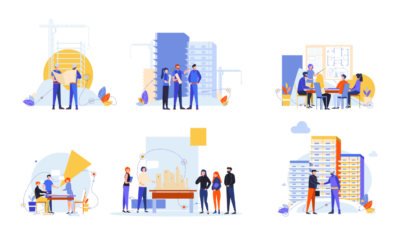